Congratulations to the University of Bristol on their publication 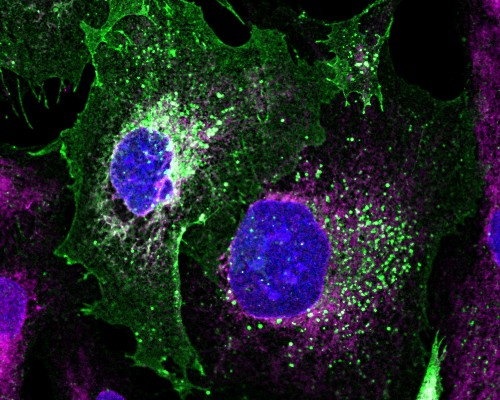 Good news Everyone! Many Congratulations to Professor Moin Saleem & Professor Gavin Welsh & fellow researchers Dr Francesco Aulicino and Professor Imre Berger from Bristol’s School of Biochemistry at the University of Bristol on their publication today.

Advanced Development by University of Bristol

The advance developed by University of Bristol scientists is published in Nucleic Acids Research. In this new study, the international team describe how they created a DNA repair vehicle to genetically fix faulty podocin, a common genetic cause of inheritable Steroid Resistant Nephrotic Syndrome (SRNS). Podocin is a protein normally located on the surface of specialised kidney cells, the podocytes, essential for kidney function. Faulty podocin, however, remains stuck inside the cell and never makes it to the surface, terminally damaging the podocytes. Since the disease cannot be cured with medications, gene therapy which repairs the genetic mutations causing the faulty podocin offers hope for patients. Typically, human viruses have been utilized in gene therapy applications to carry out genetic repairs. These are used as a ‘Trojan Horse’ to enter cells carrying the errors. Currently dominating systems include lentivirus (LV), adenovirus (AV) and adeno-associated virus (AAV), which are all relatively harmless viruses that readily infect humans. However, these viruses all share the same limitation in that they are restricted in space within their viral shells.

This in turn constrains the amount of cargo they can deliver, namely the DNA kit required for efficient genetic repair, which significantly limits the scope of their application in gene therapy. By applying synthetic biology techniques, the team led by Dr Francesco Aulicino and Professor Imre Berger from Bristol’s School of Biochemistry, re-engineered baculovirus, a for humans harmless insect virus which is no longer constrained by limited cargo capacity. “What sets apart baculovirus from LV, AV, and AAV is the lack of a rigid shell encapsulating the cargo space.” said Dr Francesco Aulicino, who led the study. The shell of baculovirus resembles a hollow stick – it simply becomes longer when the cargo increases. This means a lot more sophisticated tool-kit to repair a genetic defect can be delivered by the baculovirus, making it much more versatile than commonly-used systems. First, baculovirus had to be equipped to penetrate human cells which it normally would not do.

“We decorated the baculovirus with proteins that enabled it to enter human cells very efficiently.” explained Dr Aulicino. This modified baculovirus is considered safe, as it could only multiply in the insect, but not in human cells. The scientists then used their engineered baculovirus to deliver much larger DNA pieces than was previously possible, and build these into the genomes of a whole range of human cells. The DNA in the human genome comprises 3 billion base-pairs making up ~25.000 genes, which encode for the proteins that are essential for cellular functions. If faulty base-pairs occur in our genes, faulty proteins are made which can make us ill, resulting in hereditary  disease. Gene therapy promises repair of hereditary disease at its very root, by rectifying such errors in our genomes. Gene editing approaches, in particular CRISPR/Cas-based methods, have greatly advanced the field by enabling genetic repair with base-pair precision.

What The Scientists Say

The team used patient-derived podocytes carrying the disease-causing error in the genome to demonstrate the aptitude of their technology. By creating a DNA repair kit, comprising protein-based scissors and the nucleic acid molecules that guide them - and the DNA sequences to replace the faulty gene, the team delivered with a single engineered baculovirus a healthy copy of the podocin gene concomitant with the CRISPR/Cas machinery to insert it with base-pair precision into the genome, reversing the disease-causing phenotype and restoring podocin to the cell surface.

Professor Imre Berger explains: “We had previously used baculovirus to infect cultured insect cells to produce recombinant proteins for studying their structure and function.” This method, called MultiBac, developed by the Berger laboratory, has been highly successful to make very large multiprotein complexes with many subunits, in laboratories world-wide. “MultiBac already exploited the flexibility of the baculovirus shell to deliver large pieces of DNA into the cultured insect cells, instructing them to assemble the proteins we were interested in.”

When the scientists realised that the same property could potentially transform gene therapy in human cells, they went to work to create their new system described in their publication. Dr Aulicino added: “There are many avenues to utilise our system. In addition to podocin repair, we could show that we can simultaneously correct many errors in very different places in the genome efficiently, by using our single baculovirus delivery system and the most recent editing techniques available.” “SRNS is one of the more common genetic diseases affecting the kidney” said Professor Moin Saleem, a leading expert in the gene therapy of hereditary kidney disease at Bristol Renal. “SRNS is characterised by kidney failure at an early age, leading to severe loss in quality of life for those affected Professor Gavin Welsh concluded: “These results are very encouraging. This new approach pioneered by the Berger team holds promise not only for SRNS, but also for a range of other genetic diseases of the kidney, where efficient genetic repair is not feasible with current technology. It is a long road ahead to implement a new vector system for clinical applications, but we believe the advantages offered make this a very worthwhile undertaking.” This research received funding from the European Research Councial (ERC), Kidney Research UK (KRUK), and the EPSRC/BBSRC Bristol Research Centre for Synthetic Biology BrisSynBio.

About Professor Moin Saleem
Moin Saleem is Director of Bristol Renal, and a clinical Paediatric Nephrologist at Bristol Royal Children’s Hospital. He is also Co-founder and CSO of Purespring Therapeutics, a kidney gene therapy company.
About Professor Gavin Welsh Gavin Welsh is Professor of Renal Cell Biology within Bristol Renal and is a co-founder and Scientific Director of Purespring Therapeutics About the Max Planck Bristol Centre The Max Planck Bristol Centre (MPBC) is a joint research centre of the Max Planck Society and the University of Bristol. The MPBC is focused on the field of synthetic and minimal biology. Located in Bristol and with nodes at Max Planck Institutes in Martinsried, Mainz and Heidelberg, scientists in the MPBC aim to construct artificial cells, cytoskeletons and nanoscale molecular machines to investigate the building blocks necessary for life and their applications. About Steroid Resistant Nephrotic Syndrome (SRNS) Hereditary SRNS is a devastating kidney disease affecting children and young adults. It is caused by mutations in genes that are important in the function of the specialised filtration cell of the kidney, called the podocyte. These disorders currently have no available therapy, and result in rapid onset of kidney failure, requiring dialysis and transplantation. About Purespring Therapeutics Purespring Therapeutics is a spinout from the University of Bristol, aiming to deliver gene therapy to the podocyte in order to cure previously untreatable forms of kidney disease. It is funded by a £45M investment from the biotech Venture Capital firm, Syncona Issued by the University of Bristol.